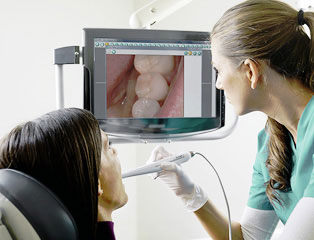 An intraoral dental camera, as the name suggests, is a small video camera resembling a pen which is used to take an X-ray image of the outside of a patient’s tooth or gum. Though it has been in existence since the 1990’s, it is still considered a new advancement in dental technology, and not yet used by all dentists. However, it is steadily becoming more popular as it makes the task of diagnosing decay and damage to tooth easier for the dentist, and allows the patient to see the problem with the tooth and understand it better.

How does it work?

A disposable protective sheath is put over each patient’s chest while using the camera. The camera is attached to a monitor and when the dentist puts the camera in the patient’s mouth, the images are transferred to a computer monitor where they can be stored for reference. The dentist moves the camera in the mouth gently to take images of teeth and gum from a number of angles.

Advantages of Intraoral Cameras for the Patients

Advantages of Intraoral Dental Cameras for the Dentists

The stored images can be used in case of any legal issues related to the treatment.